HDMI Licensing Administrator, Inc. is the licensing agent responsible for administering the licensing of the HDMI Specification, promoting HDMI technology and providing education on the benefits of the HDMI interface to retailers and consumers. 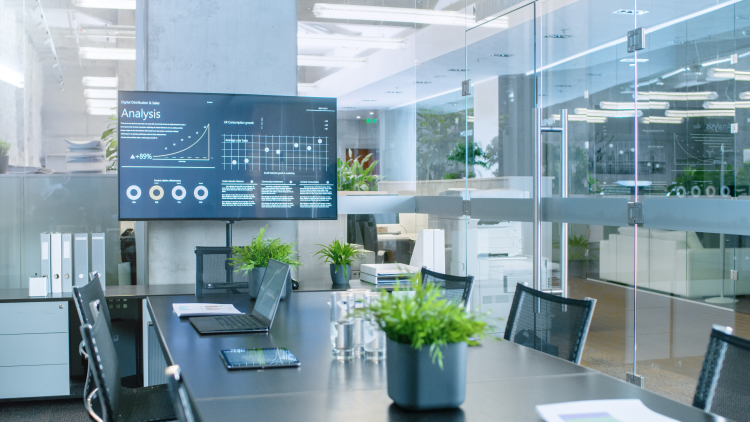 Once in a blue moon, a new product, technology, or in this case, a specification comes along that is a game-changer.

The HDMI 2.1 specification was released in November 2017. Many anticipated products such as displays, graphics cards, and cables are now available that incorporate HDMI 2.1 technology and enable the advanced features the specification offers.

Many homes will experience the benefits of HDMI 2.1 features this holiday season through the new gaming consoles, Xbox Series X, and Sony PlayStation 5.

The Big Picture
The HDMI 2.1 specification provides several attractive benefits for highly demanding AV applications such as increased bandwidth up to 48Gbps, the ability to support 4K@120Hz, 8K@60Hz  and resolutions up to 10K. These are just a few.

We explore three commercial applications and the HDMI 2.1 specification features that will have an impact, if not now, in the near future.

Game On
According to the research firm, Arizton, the global esports market is expected to reach revenues of $3 billion by 2025, so it’s no surprise that colleges and universities have gotten in on the game. If you thought that only a handful of U.S. colleges have an esports program, think again. Marketing company Learfield IMG College manages multimedia rights, ticketing, corporate sponsorship, and advertising for more than 200 university athletic programs and conferences.

Features of the HDMI 2.1 specification will ultimately change the gaming performance and could provide gaming athletes with an edge. It’s not going too far to state that nearly every HDMI 2.1 feature holds a benefit.

Speed is everything in a competition. Several HDMI 2.1 features address speed.

Becoming more widely available are TVs, monitors, and graphics cards enabled with HDMI 2.1 feature, Variable Refresh Rate (VRR). The result of the synchronization between the GPU and the display is that it reduces or eliminates lag, judder, and frame tearing for more fluid and better-detailed gameplay. “VRR allows the display to use whatever framerate the GPU is capable of delivering at the moment rather than being bound to the framerate defined under Extended Display Identification Data (EDID),” said AV/IT industry consulting solutions architect Paul Zielie, of AVIoIP. VRR enables a gaming source such as a console or computer to deliver video frames as fast as it can, which in many cases is slower than the normal static refresh rate.

Auto Low Latency Mode (ALLM) enables the ideal latency setting to automatically be set, allowing for smooth, lag-free, and uninterrupted viewing and interactivity. In many cases, this is referred to as game mode, and it usually has to be set manually, which involves going through menus and settings before switching back to normal viewing.

When every millisecond counts, Quick Media Switching (QMS) eliminates the delay that can result in blank screens before content is displayed. QMS uses the VRR mechanism to eliminate the blackout period when all devices in the HDMI connection chain change video modes. As long as the resolution remains the same and only the frame rate changes, QMS will smoothly switch between frame rates.

Until recently, gaming athletes were relegated to using small gaming monitors. “The big thing will be the larger monitor sizes, higher frame rates, and the ability to have a more immersive experience,” said AV/IT industry consulting solutions architect Paul Zielie, of AVIoIP. “With being able to process more pixels, you will have a lot more information on your screen,” said Zielie. “Now, you can have the monitor further away, which is physically and ergonomically better.”

Although you need to pay attention to which HDMI 2.1 features the TV supports, today, TV manufacturers are producing 55- 80-plus-inch displays with HDMI 2.1, which support 8K@60Hz and 4K@120Hz. Available now, some 4K@120Hz displays are enabled with VRR and ALLM. A larger monitor can create an even more immersive and dynamic gaming station. And looking to win over the gamer’s desktop, TV manufacturers are offering smaller sizes that will compete with the PC monitor.

Every detail matters in the video game. Many displays can support static and Dynamic HDR for enhanced game details with extended contrast range and expanded color spaces.

Audio is just as important as video in competitive gaming. HDMI 2.1 brings Enhanced Audio Return Channel (eARC), which supports up to 192kHz, 24-bit audio including support for Dolby Atmos and DTS:X. Several games support these advanced audio formats. This feature will benefit the audience in attendance as well as those viewing the competition at home.

A Simplified Video Wall
Video wall applications might soon benefit from a simplified infrastructure to achieve higher resolutions at scale.

“When creating a giant LED wall, you essentially have a pixel space—not the actual number of pixels on the wall—but it’s the virtual number of pixels, and you decide what you need based on distance and viewing,” Zielie explained. To reach 4K, many video walls are driven by four 1080p signals, and to scale-up in size, several displays, output cards, and cables are needed. “And if you need 8K worth of pixels on the video wall, then you would either have to bring in four, 4K connections or 16, 1080p connections.” And 16 times output cards to bring in 1080p can be ridiculously expensive, not to mention cumbersome. “With HDMI 2.1, I’m piping them out at 8K; then I’ve got one-fourth or one-sixteenth of the number of physical output cards and HDMI cables that I have to deal with.”

This might be a bit in the future, but it’s something to consider when designing your next video wall installation. “If you’re going to have a lot of pixels that you have to move, the HDMI 2.1 spec will be a huge plus,” said Zielie.

Missing Link
“The HDMI 2.1 spec use case that I am excited about is in image analysis. We have had very high-resolution images for a long time, but displays which could display the entire image context at full resolution were prohibitively expensive. The high resolution and the accuracy in color and contrast brought by Dynamic HDR will greatly improve the image analysis experience,” said Zielie. Industries which rely on highly accurate images for analysis include medicine, energy, and science.

Detail and color accuracy are of the utmost importance in diagnostics, and that’s where the HDMI 2.1 feature, Dynamic HDR shines. Dynamic HDR support ensures every moment of a video is displayed at its ideal values for depth, detail, brightness, contrast, and a wider color gamut.

In addition to 4K and 8K, a range of other resolutions are supported, including 5K and 10K for commercial AV, industrial, and specialty usages. Also supported are the latest color spaces such as BT.2020 with 10 or more bits per color at higher frame rates.

In 2019 displays were released with the HDMI 2.1 specification, but there was still a missing link. In October 2020, HDMI 2.1 compliant cables became available, creating an 8K ecosystem between HDMI 2.1 enabled products.

Updates
The HDMI Forum is continually updating and adding features to the HDMI 2.1 specification. A recent addition to HDMI 2.1 installation capabilities is HDMI Cable Power. With this feature, active HDMI Cables can be powered directly from the HDMI Connector, without attaching a separate power cable. This makes installing active wired or optical HDMI Cables as easy as using any HDMI Cable. Importantly, this feature must be supported by the source device; and all types of HDMI Cables may incorporate HDMI Cable Power.